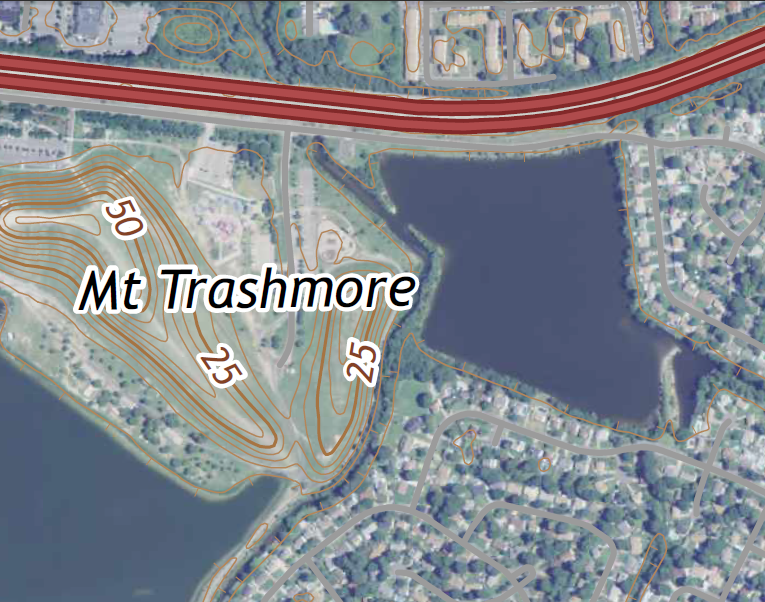 One of the highest points in Virginia Beach is the artificially-made former landfill known as Mount Trashmore. It is over 60 feet tall and 800 feet long, while Encore Hill next door is roughly half that height.1

The water table is too high in Virginia Beach to construct a pit and place trash deep in the ground. As the city dumped its municipal solid waste in one location, a higher and higher mound formed. Residents jokingly called it "Mount Trashmore," comparing it to the famous Mount Rushmore.

City officials considered choosing a different name, perhaps one associated with Roland E. Dorer. He was the director of the State Department of Health, Insect and Vector Control, and a leader on the city parks commission who advocated for converting the dump into a park. Because sea gulls had swarmed the site while fresh trash was being deposited, one proposed name was Gull Dorer City Park. Local residents made clear that Mount Trashmore was preferred, and the name was adopted officially.2

After compacting 640,000 tons of trash at the site and covering it with layers of "clean dirt," the city closed the landfill in 1971.

Two "borrow pits" where dirt had been excavated for covering the trash and for construction of the Virginia Beach Toll Road were converted into Lake Windsor and Lake Trashmore, which total 70 acres. Lake Windsor is brackish, because Thalia Creek connects it with the Western Branch of the Lynnhaven River. Lake Trashmore is freshwater, not connected by a surface stream to any local waterway.3

The organic material in municipal solid waste decomposes gradually, and the process generates methane gas. Seven vents were built in the clay cover at the top of the now-closed landfill to prevent that gas from forcing open cracks, which could allow rainwater to seep into the waste and create leachate ("garbage juice") that would flow into a nearby creek.

As an April Fool's Day joke in 1992, a local radio station broadcast that methane had built up inside Mount Trashmore and it was about to explode like a volcano. Two disc jockeys warned everyone within a seven-mile radius to evacuate. Listeners made enough phone calls to local police to jam the phone lines, until a police car arrived at WNOR and warned that the prank could delay response to a serious emergency. The radio station managers suspended those responsible for one-two weeks, and the Federal Communications Commission updated its regulations to authorize fines for transmitting fake news.4

Visitors who end up standing near one of the vents can testify that the methane is still escaping, as designed. Three of them are disguised as flagpoles.

In 1971 when the landfill dumping stopped, the price of natural gas was still regulated by the Federal government. The prince was so low then that it was not cost effective to build a methane capture system for use in an electrical generator. The methane production is gradually diminishing as bacteria decompose all the organics in the buried solid waste. The methane releases remain uncontrolled; no productive use of the landfill gas is feasible now, and the greenhouse gas will continue to seep out of Mount Trashmore.

Encore Hill and Encore Hill were converted into a public park in 1973. Today, Mount Trashmore Park is the most heavily-used city park in Virginia Beach, popular with skateboarders, picnickers, and kite fliers.5

Until 2000 the city allowed skiers, snowboarders, and sledders to slide down Mount Trashmore. After an 11-inch snowstorm in 1996, 5,000 people crowded onto the "mountain." There were excessive injuries as people slid into each other, into obstructions, and underneath cars:6

It got to the point that Virginia Beach EMS returned to Mount Trashmore from after hospital runs to wait for the next, seemingly inevitable, injury.

In 2002, a rubber sheet was added at the top of the rubbish pile to ensure water would not seep through the soil cap and create leachate. Soil on top of the rubber sheet supports a layer of grass, and allows for recreational activities on the highest peak in Virginia Beach.7

Virginia Beach still uses Mount Trashmore II, but after the city joined the Southeastern Public Service Authority it shipped most waste to a Refuse Derived Fuel (RDF) plant, a waste-to-energy power plant generating electricity, and a regional landfill in Suffolk.

Mount Rushmore II remained as an alternative disposal site during renegotiations of the regional compact to renew the Southeastern Public Service Authority in 2018, but re-opening Mount Trashmore was not an option.9 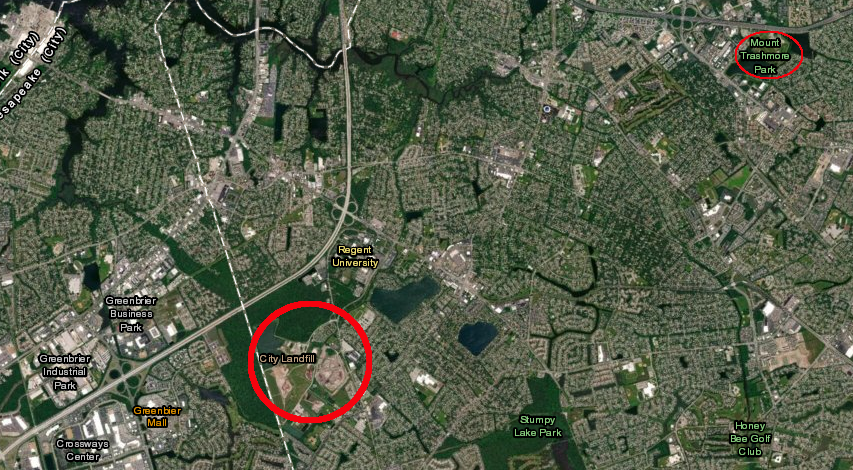 This article is about the Virginia Beach site. For other uses, see Mount Trashmore (disambiguation).

Mount Trashmore Park, also known simply as Mount Trashmore, is a city park located in Virginia Beach, Virginia which opened in 1974,[1][2] Mount Trashmore is an example of landfill reuse, as its creation consisted of the conversion of an abandoned landfill into a park. The park spans 165 acres (0.67 km2) with hills larger than 60 feet (18 m) high and 800 feet (240 m) long. Facilities include three large, two medium, and six small picnic shelters, playground areas, four volleyball areas, parking, vending machines and restrooms. Mount Trashmore Park also has multiple walking trails - a Perimeter Trail that measures 1.95 miles (3.14 km), a Lake Trail that measures 1.45 miles (2.33 km), and a Mountain Trail that measures 1.30 miles (2.09 km). The Lake Trail and the Hill Trail may be combined for a trail measuring 2.75 miles (4.43 km). The park also features two lakes where fishing is permitted. Since its opening in the 1970s, it ranks as the most popular park in Virginia Beach, with attendance of over one million visitors a year.[3]

The park is open 7 days a week from 7:30 a.m. until sunset.[4] In warmer weather, the area does still occasionally smell of garbage.[2]

Kids' Cove, an innovative playground designed for children using children's ideas and input, is also located at Mount Trashmore Park, and opened in 1993. The playground is handicapped accessible and it was constructed totally by volunteers and coordinated by the Virginia Beach Jr. Woman's Club.[5]

A new, $1.4 million Kids' Cove reopened to the public in December 2010. The new playground is nearly twice the size of its predecessor.[6]

Mount Trashmore Skate Park is located in the northeast corner of the park, where numerous professional skateboarders have made appearances, including Tony Hawk.[7] The 24,000-square-foot (2,200 m2) skate park opened in August 2003 features an extensive street course including an above-ground, 7-foot-deep (2.1 m) bowl.[5] The park also has a competition-sized vert ramp over 13 feet (4.0 m) tall and 40 feet (12 m) wide. On 16 August 2006, a fire damaged a significant portion of the skate park.[8] The skate park was completely rebuilt as of March 2007.

What You Need to Know

Mount Trashmore is a former landfill with 6 million tons of garbage. The former landfill is being transitioned into a recreational site. As it looks like a park and has park like features, it is still a landfill. At the top of Mount Trashmore you will find the best view in Linn County! Come see for yourself! If you like to mountain bike, bring out your mountain bike and ride our unique gravity fed flow trail! It's something you won't want to miss!

Please be aware there is increased TICK activity this year. Make sure to check yourself and pets after using the trails.  The Solid Waste Agency is taking steps to limit tick exposure, including mowing vegetation adjacent to trail surfaces and spraying tick repellent along the trails.

All users must check in before using the site. Find more information below. 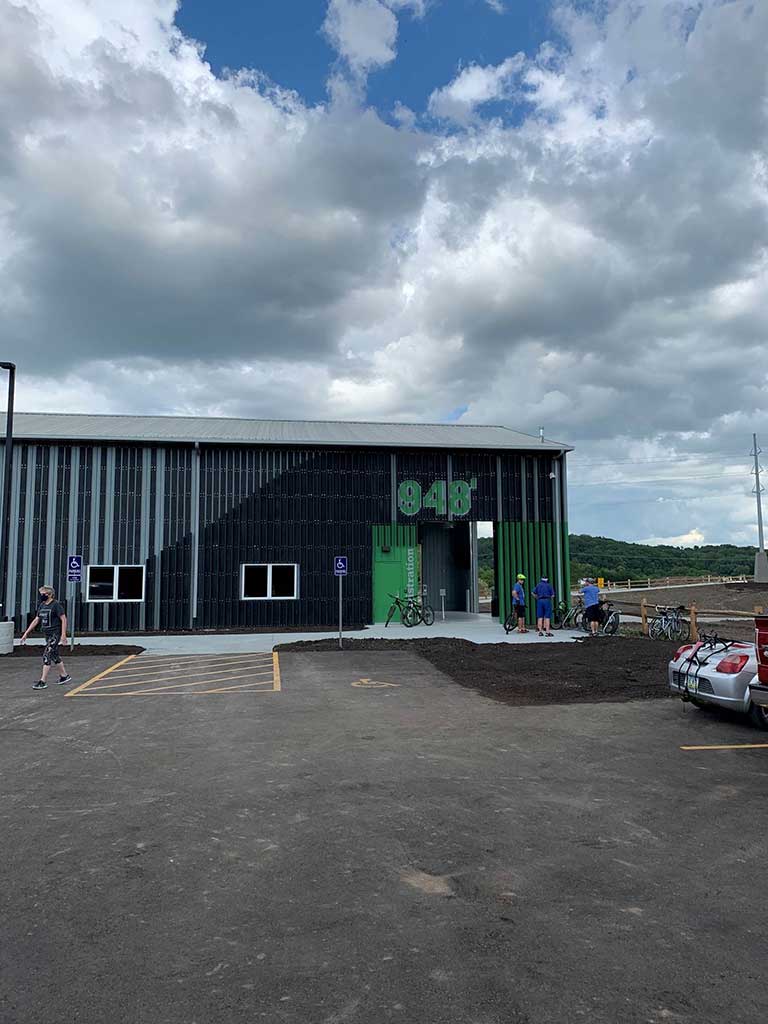 All users are required to check in before using the site, you will find check-in kiosks inside of the recreation  building. Trail users can bike or walk in from the Cedar Valley Nature Trail or use parking lot adjacent to  the recreation building.

Per current CDC guidelines, while in the recreation building, visitors who have not had the COVID-19 vaccine should wear a mask and maintain 6ft of distance from other users. Those who have had the vaccine do not need to wear a mask. 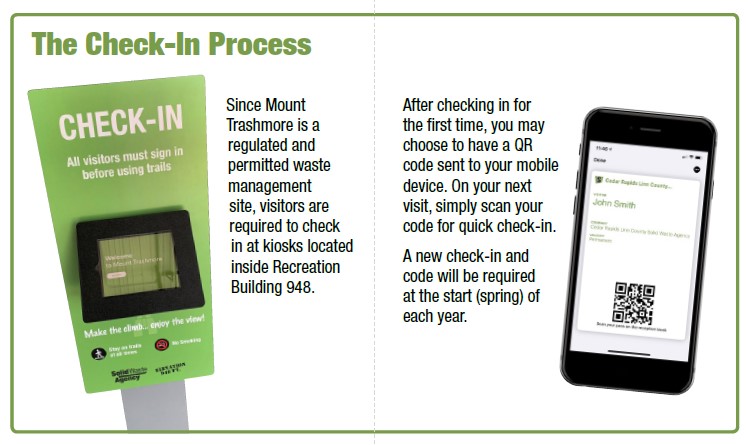 Mount Trashmore Trails are built on a closed and capped landfill. The area is not a public park, but continues to be a regulated and permitted site. Our goal is to provide access to a great view, but with safety as our first priority. 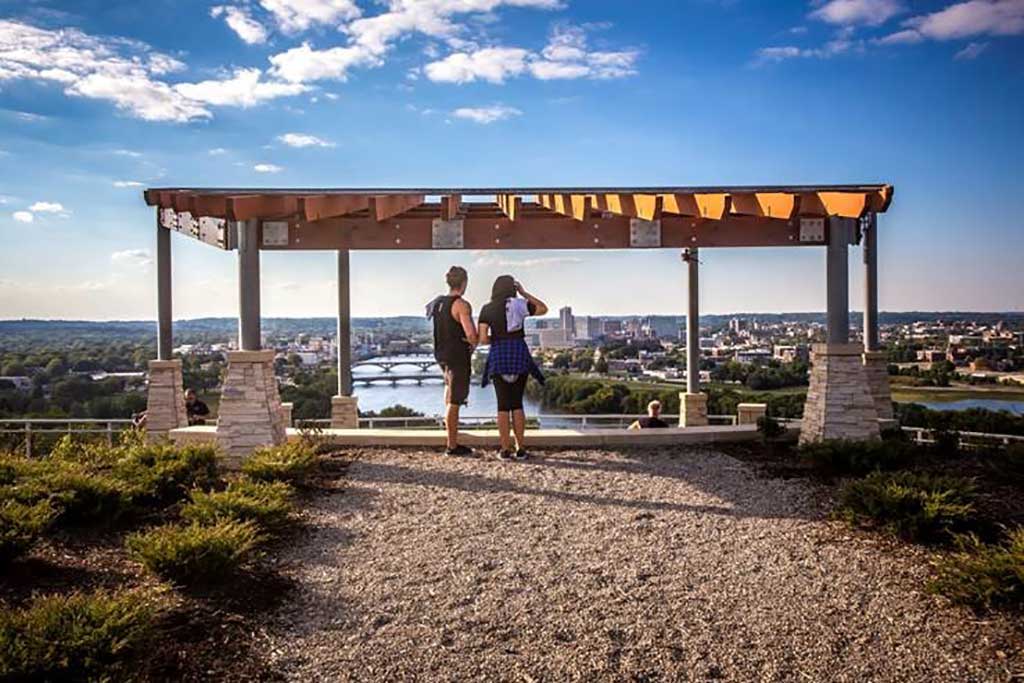 Watch for truck traffic! Trails are adjacent to an operational compost facility with a shared entrance and roads.

Stumptown trail is for walking and run 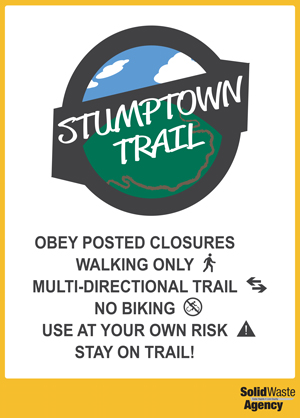 ning only. This trail is 5,000ft (appx. 1 mile). No bikes or strollers. This is the longest trail at Mount Trashmore. You will encounter board walks and stairs. Caution: steep grade in sections of trails. 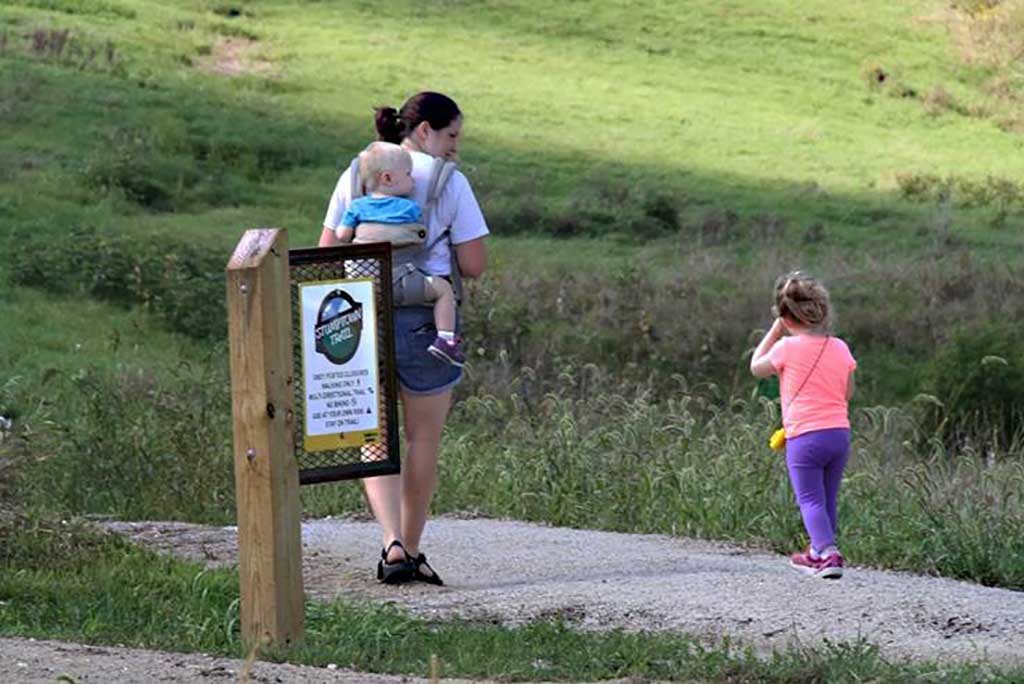 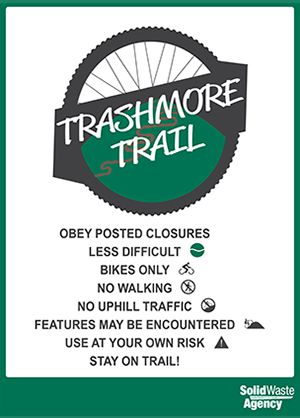 Trashmore Trail is a downhill bike trail only. No walkers/runners allowed. This trail is a gravity-fed flow trail with mountain biking features and should be ridden carefully. Two inch or wider tires are recommended. 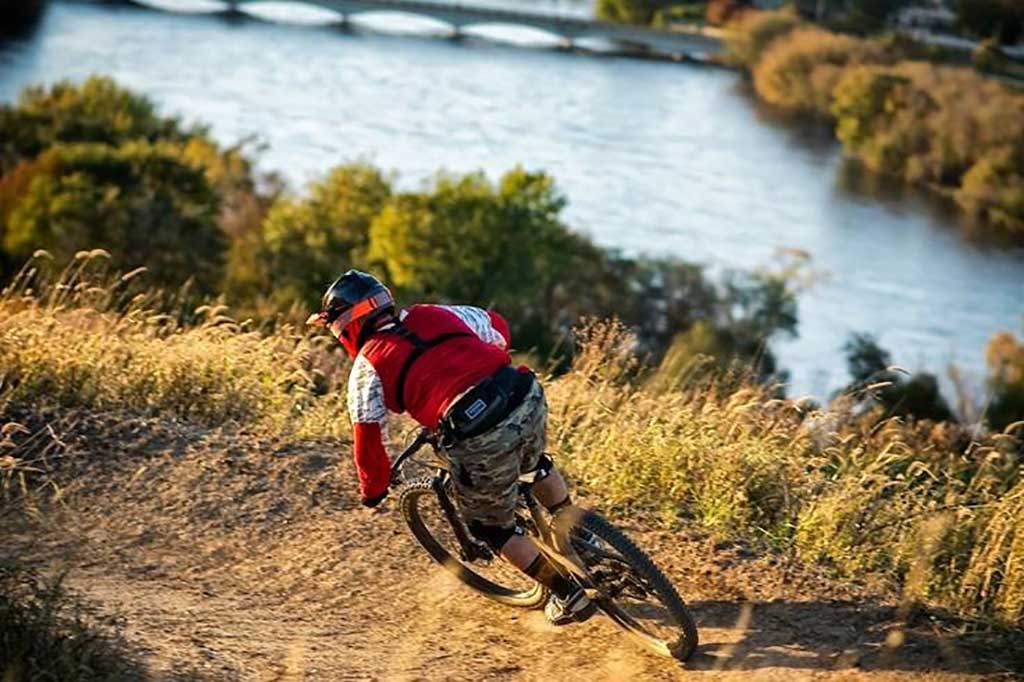 Overlook Trail is a multi-use trail that includes bikers and walkers. 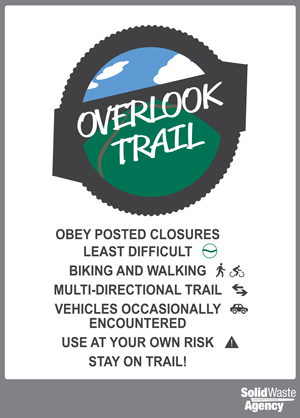 This trail is 3,400ft (appx. 5/8 mile) and is the shortest way to the top of Mount Trashmore. You may encounter vehicles who are accessing the ADA parking spot at the overlook. 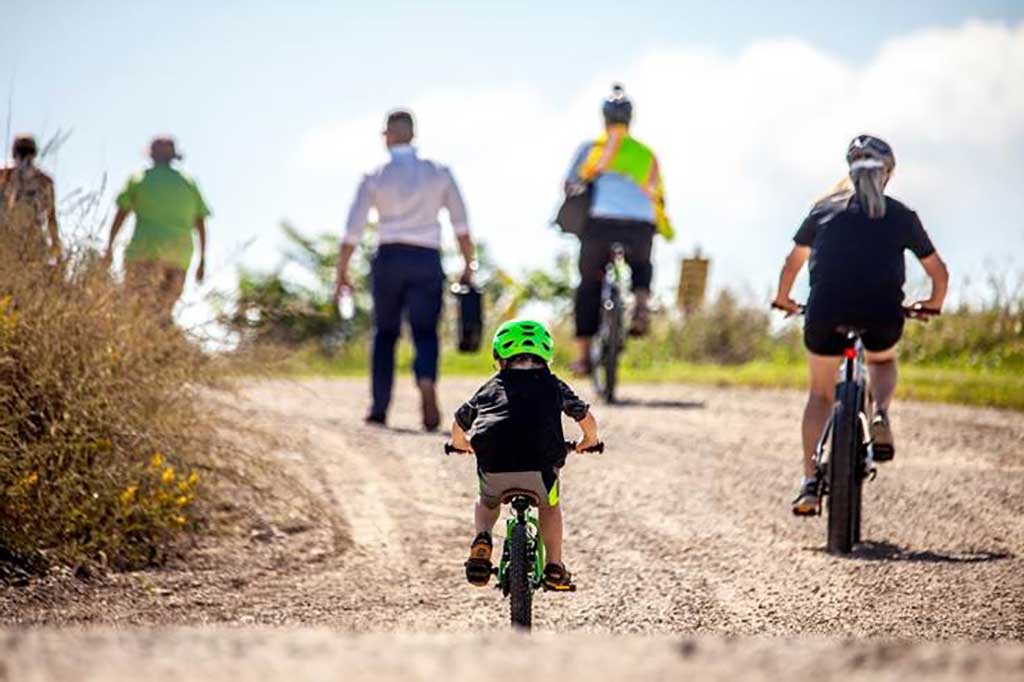 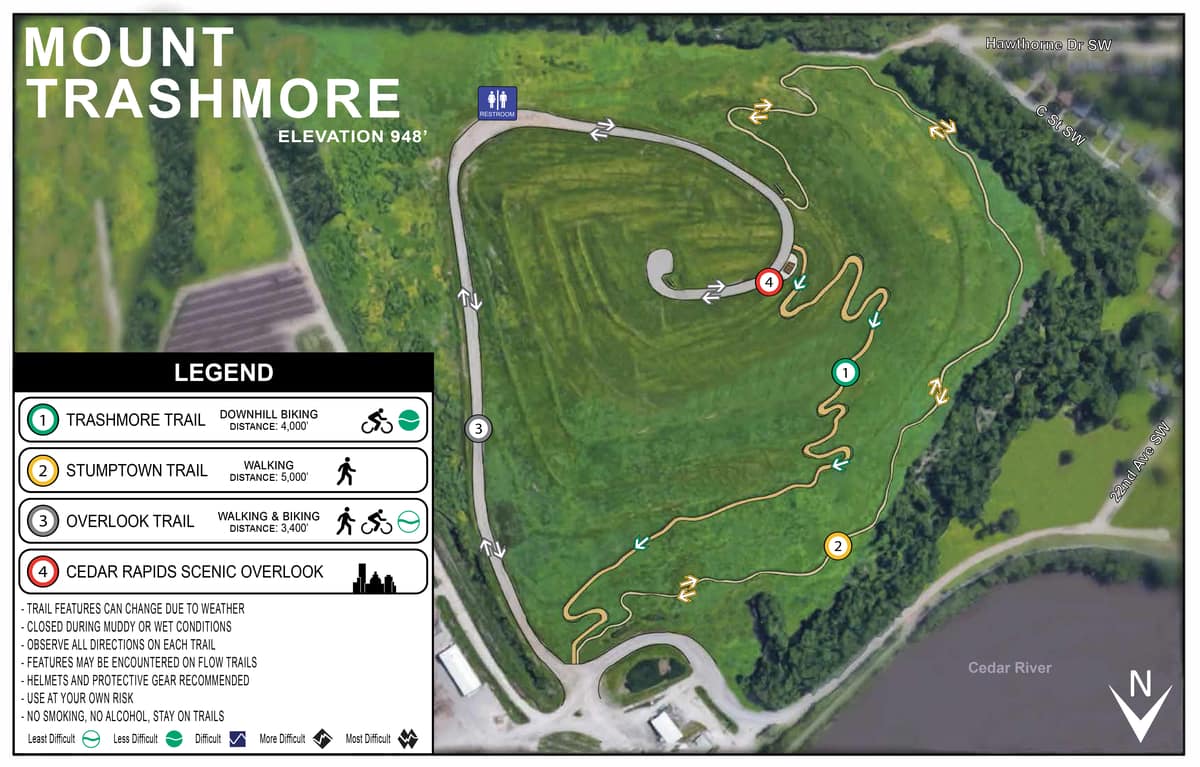 Most beautiful wallpapers ever