Todd Woodard has been editor of Gun Tests Magazine since 1998 and had previously been managing editor and a contributor for the magazine going back to 1992. He began competitive shooting at the age of 10 in NRA-sanctioned smallbore rifle matches, earning various local and regional wins as a sub-junior shooter, including a state 4H championship. In college at Texas A&M, he earned three letters on the university's smallbore rifle and air rifle teams, and he served as captain of the team for two years. He was also the first A&M student to qualify for an NCAA Championship slot. He graduated with a B.S. in Journalism.  Other roles he has served in included Shooting Venue Press Chief for the Atlanta Olympic Games in July 1996; editor, Guns, Gear & Game; editor, American Gunsmith Book Series; editor, Women's Shooting Sports Foundation Magazine; editor, Performance Shooter Magazine; marketing manager for Kenner Boat Co.; managing editor for the Hunter's Handbook Annual (Seattle); consulting editor for The Range Report, produced by the National Shooting Sports Foundation in Newtown, CT; regionals editor for Heartland USA, produced by U.S. Tobacco in Greenwich, CT; and executive publisher for Texas Sporting Journal in Houston. He has also pulled duty as a columnist for Gun Digest the Magazine (F+W Publications), copy editor for Fair Chase, a publication of the Boone and Crockett Club (Missoula, MT); and as a contributing editor for the Gun Digest Annual. As a blogger, he has produced news-related content for the Defender Outdoors blog (Fort Worth, TX) and Midsouth Shooters Supply "Shot Report" Blog (Clarksville, TN), and was senior content writer for U.S. & Texas LawShield (Houston). In addition to Gun Tests, his current projects include page production for the Texas Trophy Hunters Association (San Antonio, TX) and book production for Dust Devil Publishing of Midland, TX. He has also edited the 14th, 15th, and 16th editions of Cartridges of the World and authored the Brownells Guide to 101 Gun Gadgets and Shooter's Bible Guide to Cartridges (Skyhorse Publ.)

Shadow Systems MR920: Fully Custom, Out of the Box.

Shadow Systems, based in Plano, Texas, released the MR920 at SHOT 2020 (MR stands for Multi-Role), which comes within a year of their previous release, the MR918. The platform is based on the tried and true Glock design with a proven track record from law enforcement agencies and civilians the world over. Shadow Systems started out with high performance parts, barrels and eventually complete top-ends; they have since transitioned to manufacturing and selling complete firearms.

The MR920 has similar features to the MR918 – in that it has the lightly stippled frame and grip, NPOA (Natural Point Of Aim) backstraps which alter the grip angle to the shooter’s preference, undercut trigger guard, accelerator cuts/thumb shelves for recoil management, removable magwell, lightning cuts and slide serrations (on the Elite model) and even an RMR mount. However, the MR920 has some key differences from its predecessor.

The MR920 has a redesigned beavertail allowing the shooter’s hand to ride up higher to the slide, functionally lowering the bore axis. In addition, it also has an innovative patent pending mount that allows the user to secure a litany of red dot sights – from the standard RMR/Holosun footprint, to the Vortex Viper, Deltapoint Pro, and more. This was accomplished, according to Shadow Systems CEO Trevor Roe, by moving some internal slide components around to use the deepest screws in the game. “We mounted various optics and hit it with a deadblow hammer in testing, and it still held zero in all our tests, even where other slides by competitors failed,” touted Roe in a phone conversation in January shortly before unveiling at SHOT 2020. Another subtle but significant difference between the MR920 and 918 is in the slide – they removed some material from the rear, giving it more of an angle to “increase comfort when carrying inside the waistband,” according to Roe. Furthermore, they added some more material under the slide stop to prevent inadvertent engagement during firing. 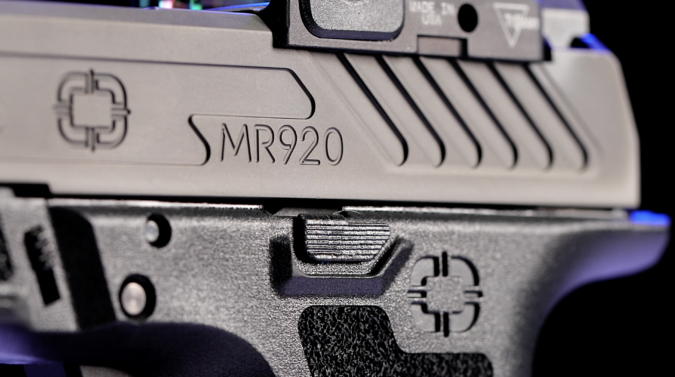 The pistol ships with a Shadow Systems bag, a pin removal tool, 3 backstraps (S/M/L), a proprietary magwell, 2 Magpul 15 rd Pmags, and all the screws and shims needed to mount various optics (for the Elite version with an optics cut).

Ergonomics: The pistol points incredibly natural and with the enhanced beavertail, it reminds me of a CZ P01. The control available from the high grip shows most in easy follow up shots and the thumb ledge helps reinforce proper hand placement. The trigger guard is thinner than stock Glocks, eliminating the infamous “Glock knuckle.” Moreover, the modular backstraps help you tweak the pistol to your preferred angle. I opted for the medium backstrap which is damn close to a standard G19, but with the elongated beavertail it feels ever-so-slightly thinner. The small backstrap mirrors 1911 ergonomics closely. The texturing and position of the magazine release is subtle and positive and does not lend itself to inadvertent activation. The texture balances well between comfortable for carrying against the body, and aggressive enough when bearing down on the grip. The magazine well is slightly flared internally, but the proprietary magwell makes magazine changes under pressure faster, giving the shooter a wider mouth to access under speed.

Looks: For the MR920 Elite, forward , rear, and top serrations make it look aggressive, and are deep enough to rack it off a table or bench. I’ve been finding myself racking with the RDS when doing one-handed manipulations, and the forward serrations are nice for press checks. I do wish they were a bit more aggressive, like Shadow Systems Gen 4 Glock top ends which are no longer being made. Taking account the variety of custom glocks, the MR920 from front to back leaves no part untouched. Photo Credit: Shadow Systems

Trigger: The trigger could use some work. It has some mush to it and creep before it breaks. The reset isn’t horrible, but not as crisp as other flat face options on the market.

Accuracy: With a Holosun 407cV2 mounted, ringing 4-inch steel plates at 35 yards under the pressure of a competition clock left nothing to complain about. The version I tested ships with suppressor-height sights, blacked out rears, and a tritium green front sight. Without an optic, it’s plenty accurate out of the box for any indoor range or real-world applications.

Reliability: It’s eaten over 1,000 rounds of various FMJs and hollow points, ranging from 115 grain to 147 grain, with no issues whatsoever. Boringly reliable.

Shooting: One word: Flat. Considering the pistol remarkably light, this took me by surprise (as seen below, even with a 2.65 ounce dot mounted on the top, it's still over a half ounce lighter than a stock Glock 19). The ergonomics, design, and machining all come together well in one modular package. Glock 19 Gen 4 with standard sights, and Overwatch Precision trigger is over a half ounce heavier, but it feels like more in the hand when comparing the two.

Customization: Per Shadow Systems, many parts are interchangeable with standard Glocks, but not all. In theory you could run the slide on a Gen 4 frame or vice versa, but that is not recommended. It uses a captured Gen 3 recoil spring so you could swap out the Gen 3 springs of your choice. The back plate is proprietary, as is the removable magwell and some internal components. I do like that you can take off the magwell with 1 pin, since it does print rather badly if you carry appendix or IWB. Also, if you shoot Carry Optics in USPSA, magwells are illegals but can be using in IDPA Carry Optics divisions. It could serve multiple roles as a carry, duty, or competition rig – as the MR (multi role) implies.

Final Thoughts: For what it’s worth and the price point, you get a ton of features out of the box without the hassle of stippling, milling, adding a mag well etc. Some design choices may appear over-engineering (as seen by the extra material taken from the rear of the slide, or the “enhanced” slide release recession), but can serve as a fine sidearm, nightstand gun, or competition rig. The angled edges at the muzzle help with reholstering, especially when carrying IWB. I’d have rather seen a crisper trigger with less take-up, but that’s an easy fix with so many drop-in options on the market. The fit and finish are outstanding, with smooth action right out of the box, and a coating that is as good, if not better, than Glock’s.  The optics mounting system is where it really shines, and boy, does it shoot flat and fast. In a world of Glock clones, polymer-80 kits and the like, this one is pretty solid (and sexy looking) right out of the box.

The Shadow Systems MR920 Combat is a feature-packed, compact-sized pistol that is designed to work with existing G19 holsters, magazines, and gear. The MR920’s frame features configurable ergonomics. Interchangeable backstraps allow shooters to adjust the grip angle to fit their natural point of aim. An extended beavertail and aggressive trigger guard undercut work to dramatically reduce recoil and increase controllability. The frame’s wrap-around grip texture is aggressive enough to keep the gun firmly in the shooter’s grip without being uncomfortable for daily wear.

The MR920 slide has a thinned profile at grasping locations and directional serrations in the front and rear for easy manipulation under stress. The match-grade barrel is conventionally rifled and spiral-fluted to improve evacuation of debris. The drop-safe, flat-faced aluminum trigger has a 4.5-5.0 lbs trigger pull and a crisp, tactile reset.

Made In United States of America

Was the information on this page helpful?

Find FFL Dealers Near Me

NOTE: Prices, specifications and availability are subject to change without notice. We reserve the right to correct typographic, photographic and/or descriptive errors.
Sours: https://www.midwayusa.com/product/1023078514
Shadow Systems MR920 vs Glock 19