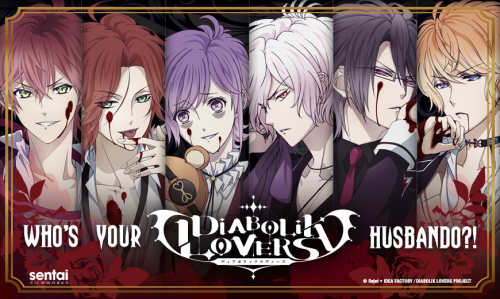 I got “Shu Sakamaki” on “The Diabolik Lovers Husbando Quiz”. What about you? http://www.sentaifilmworks.com/news/diabolik-lovers-husbando-quiz #diaboliklovers via @sentaifilmworks

A text-based quiz for the ages!

In the 32nd episode (overall, aka the second season’s 7th episode) of Classicaloid, Kanae’s mother and Liszt go around looking for husband material. That doesn’t mean you have to miss out either, though – just take this quiz based on their analyses and you can claim yet another husbando of your own. Don’t worry, waifu fans, you just need to scroll down a bit more to take your own version of the quiz.

START – 1) What sort of man are you looking for?

A sensitive sort who knows how I feel – go to 2

2) If you had to pick the lesser of two evils in regards to your husbando’s flaws, which would be the better (in other words, more tolerable) choice?

Passion, directed towards one source – ending 2

Creativity, which engulfs everything – go to 5

4) When it comes to music, would you prefer an up-and-comer or an established musician?

5) What sort of depths would you like your husbando to have?

He’s constantly experimenting with things, thus being open to everything – ending 2

He’s still holding on to trauma from long ago, so he uses happiness to cover it up – ending 3

Ending 1 – Schubert: A solid supporter of his Beethoven-senpai, Schu is known to really make things go wacky, whether it be turning people into aquatic creatures or rapping about avocadoes. Maybe he just needs a person to believe in him like he believes in his senpai…

Ending 2 – Beethes: The man knows no limits, whether it be guitars, gyoza or a quality cup of coffee. This Beethoven may not be deaf, but he definitely exhibits the passion necessary for his name.

Ending 3 – Motz: Motz is a fibber, a girl-chaser and a prankster, but underneath this lies a heart more traumatised than he likes to admit. Of course, the right sort of person can will be able to accept him for who he is, regardless of all these attributes.

Ending 4 – Cho-chan: The introverted Cho-chan is your ideal (or maybe just your result). He’s a bit of a recluse and an internet addict, but with the right person, he”ll come out of his shell.

Ending 5 – Sousuke: Kanae’s childhood friend and constant hanger-on, Sousuke’s a bit of an idiot, the resident punching-bag and full of pride, but I’m sure you can handle him…well, at least you have Pad-kun if you can’t…

START – 1) What sort of woman are you looking for?

2) What preference do you have when it comes to your waifu’s hairstyle?

4) What sorts of opinions do you have when it comes to music? (If you agree with more than one, then pick the one you feel strongest about.)

Music should be experimental – ending 2

Ending 1 – Bada-chan: She may be a one-hit wonder, but she makes up for it with her looks, kindness…and maybe the wrath of a thousand suns if you get her angry…

Ending 2 – Tchaiko-chan: She’s a grumpy vodka-drinking lass obsessed with eating mushrooms and being a slob, but she’s smarter than she looks, really! She and Bada-chan are like peas in a pod, so maybe you and her will get along well too.

Ending 3 – Kanae: The landlady of the Otowa mansion. She’s a bit stubborn, but evenly balances things like the pursuit of love (?) with getting other residents in line with her ideals of the “perfect guest of the mansion” (to varying degrees of success).

Ending 4 – Liszt: The lady who loves love itself. Although she has the body of a mature woman (which she uses to sip cocktails a lot less often than you’d expect), she can still be as childish as the other residents of the Otowa mansion and yet still have Kanae’s best interests at heart. Maybe she’ll have yours there too someday…?

So who’d you get? Do you think your result is accurate for a basic test I whipped up in an hour or two?

Just an average person who serves as an average blogger...when they're not off watching anime/reading manga, listening to music or wandering off somewhere else, that is. View all posts by magicconan14 (Aria)

Waifu Quiz – Who Is Your Waifu

Take this Waifu quiz to find out who is your waifu. We update the quiz regularly and it’s the most accurate among the other quizzes.

Waifu is an English loanword that first appeared in Japanese dictionaries in the early 1980s. The dynamics between husband and wife continued to alter in such a way that young couples found the traditional approach of referring to a woman as a wife objectionable. Kanai, a Japanese name for wife that combines two Chinese characters that indicate “within the house,” proved offensive to many young women. Similarly, the words for husband, Shujin or Danna, loosely translate to “master.” Because these words do not adequately describe their connection, many couples have adopted the English words husband and wife. Of course, the words’ pronunciation differed slightly. Their wife morphed into waifu. Husband developed hazu (Stanlaw, 2004; Rebick & Takenade, 2006).

These terms were gradually adopted by American anime/manga fans, who used them to refer to their favorite fictional characters. The anime Azumanga Daioh is regarded to be one of the first to popularize the term “waifu” (Waifu, 2010). However, the words were in the Japanese vernacular and were used in anime long before they became widespread.

A waifu is a fictitious character who an anime fan perceives to be a wife or spouse. There is a term for male anime characters that female anime viewers adore: husbando. It’s odd that the online otaku culture chose this word over the Japanese word hazu to describe this relationship. In any event, waifu is sometimes used by female anime viewers to allude to male interests. The labels aren’t entirely firm. Also, you must try to play this Waifu quiz.

A waifu, in any event, is a fictional character that a person adores. It’s a relationship that exists on a scale. Some people take waifuism lightly. It’s something lighthearted and fleeting. Those that take the relationship seriously are on the other end of the spectrum. To signify their marriage with their waifu, they wear a wedding band. They try to make decisions based on what their waifu would like. She is a real person who can be disappointed, enraged, or injured (Reddit, 2012).

Erza Scarlet, a fan favorite from the Fairy Tail series, is at the top of our list!

Essentially one of the most powerful characters in the Fairy Tail universe, with the potential to both become a hero and succumb to the dark side.

That’s how intricate her personality is. Erza has an undeniable fondness for weapons and armor.

Her combat stats are nearly flawless! She is a skilled swordsman who specializes in speed, power, and intelligence.

Asuna Yuuki is a character from the contentious anime series Sword Art Online. Kirito’s companion as well as his love interest.

A sub-leader of the Knights of Blood and an accomplished player throughout Aincrad.

She is one of the game’s fastest characters, a master of the rapier, and can also utilize daggers in close combat.

Hinata Hyuga, the wife of the famous Naruto and a fierce ninja herself, is now on the list if you were hoping to see her.

Hinata had planned to marry Naruto from the start because he was her crush.

She possesses two Nature Types, Lightning Release and Fire Release, which she rarely employs but which have proven useful on the battlefield.

Lucy was born into an affluent family, but owing to her deteriorating relationship with her father, she flees the wealth and the estate to forge her own path.

Lucy understands that her sex appeal works wonders for her and that she utilizes it to acquire virtually everything; she is also represented as this snobbish girl.

Despite her preference for vanity, Lucy is nevertheless kind to others and her Celestial Spirits.

Yuno Gasai, the main female protagonist of Future Diary, is the proprietor of ‘Yukiteru Diary / the Diary of Future Love.’

Yuno’s preoccupation with Yukiteru, the series’ hero, is strange. Yuno is analogous to two sides of the same coin.

She is this bashful, timid, almost feminine-like female around Yukiteru. When he isn’t there, she adopts a chilly, deadpan, and calculative demeanor.

This is due to her parent’s death before the start of the Survival Games. Yuno is a character cloaked in mystery, and you never know what she’ll do next, even threatening the person who stands between her and Yukiteru with death.

Quiz: Which Anime Boy Is Perfect To Be Your Husbando?

Which Anime Character Are You Most Like? If you are an anime lover, then this is an ultimate quiz which you can go for. Many inspiring shows are there to choose from. In every anime show, many exciting incidents happen, which we...

Hunter X Hunter Nen Test: What Is Your Nen Personality?

Ready for a quick Hunter X Hunter quiz? This Nen test is here so you can see into what category you may fall. Hisoka said that judging people's personalities to know what category they fall into can be highly inaccurate. So...

Which Anime Should I Watch? Quiz

Anime series are so catchy with the different-different heroic characters and storylines. Are you confused about what you are willing to watch today? Worry no more as the quiz below will give you a fantastic choice for the day....