Benfotiamine is converted to thiamine, which serves as a key factor for three enzymes involved in generating energy from glucose [1]. Preclinical studies have found that benfotiamine enhances cognitive function and reduces biological markers of Alzheimer's disease [2][3]. These benefits may be due to benfotiamine's ability to suppress the activity of an enzyme that promotes the progression of Alzheimer's [4]. However, benfotiamine's effects on this enzyme have not been confirmed in humans.

Recommendation was sent to {{vm.model.email}}

The information presented in Supplement Guide is for informational purposes only and should not be considered medical advice. Nutritional recommendations are based on established guidelines for people of average health and on associations between vitamins, minerals, and herbs with health conditions from published scientific studies (human, animal, or in vitro), clinical experience, or traditional usage. These associations may not be true for all individuals and are not based on specific product brands or formulations. Nutritional and herbal products may vary widely in ingredient purity, concentration, and combinations, which may affect people differently. Consult your doctor, pharmacist, or other professional for any health problem and before adding supplements to your self-care practices or discontinuing any prescribed medications. It is important not to make any changes in your self-care, including taking supplements, before or after a surgery without your doctor's express recommendation. In addition, please consult with your healthcare practitioner to make sure that your cumulative daily intake of copper, selenium, zinc, vitamin B6, folic acid, or any other nutrient, does not exceed established, tolerable upper intake levels. Information and statements regarding dietary supplements have not been evaluated by the Food and Drug Administration and are not intended to diagnose, treat, cure, or prevent any disease. By using Supplement Guide you understand that recommendations are in no way intended as a substitute for medical counseling and neither the publisher nor the authors have liability or responsibility to any person or entity receiving or using this information.
Copyright© 2021 Life Extension. All rights reserved.

Please note that you are leaving your Supplement Guide results. To save your recommendations, click the X in the upper right corner and then click Print or Email. Otherwise, click Continue. Always get the lowest price
and FREE SHIPPING. Learn More

Take twice/day with meals. No side effects

Yes I will purchase again and again.

I believe in the benefits derived from this product.

Read All Reviews | Write a Review 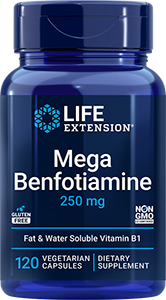 What Is Mega Benfotiamine?

Mega Benfotiamine is formulated with 250 mg of benfotiamine and 10 mg of thiamine (vitamin B1) to support healthy blood sugar metabolism. It also helps protect your body against oxidative stress and glycation, a biochemical reaction that can contribute to a variety of age-related factors.

Benfotiamine may also be more helpful in certain situations than thiamine: for example, the enzyme transketolase is critical to blood sugar metabolism and requires thiamine as a cofactor. Unfortunately, the water-soluble thiamine is less available to the interior of the cell, while benfotiamine is fat-soluble and can easily penetrate the cell membrane.

98% of our customers recommend us to family and friends. Life Extension is proud to be recognized as the #1 Catalog/Internet Merchant — 6 Time Winner.†

40 years of research dedicated to bringing you premium, scientifically-validated formulations.

99% of our products are manufactured in the U.S, and a Certificate of Analysis is available for every product we produce.

Benfotiamine is also more bioavailable than the water-soluble thiamine.1 In a landmark study, benfotiamine effectively increased transketolase activity in cell cultures by an astounding 300%, compared to a mere 20% for thiamine. This robust activation was sufficient to block three of the four major metabolic pathways. Benfotiamine also blocked the activation of the transcription factor known as nuclear factor-kappa B (NF-kB). 2

These statements have not been evaluated by the Food and Drug Administration.
These products are not intended to diagnose, treat, cure, or prevent any disease. 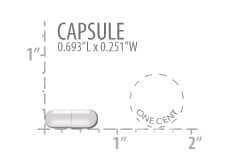 Product reviews are provided for informational purposes only and reflect solely the views and opinions expressed by the contributors and not those of Life Extension. We do not verify or endorse any claims made in these reviews. Please read the full product reviews disclaimer.

The information provided on this site is for informational purposes only and is not intended as a substitute for advice from your physician or other health care professional or any information contained on or in any product label or packaging. You should not use the information on this site for diagnosis or treatment of any health problem or for prescription of any medication or other treatment. You should consult with a healthcare professional before starting any diet, exercise or supplementation program, before taking any medication, or if you have or suspect you might have a health problem. You should not stop taking any medication without first consulting your physician.

Benfotiamine is a dietary supplement that is a derivative of thiamine (also known as vitamin B1), a B vitamin found in a variety of foods including legumes, nuts, seeds, wheat germ, fortified grain products such as bread, cereal, pasta, rice, and flour, and some meat and fish. Since benfotiamine is fat-soluble and appears to have higher bioavailability and better absorption by the body than thiamine, some people use it to raise their thiamine levels and manage certain health conditions.

What Is Benfotiamine Used For?

Thiamine deficiency is considered rare in the United States.﻿﻿ With that being said, people who mainly eat highly refined carbohydrates (such as white rice) or unfortified white flour products, or who avoid whole grains, may be at greater risk for a thiamine deficiency. People with prolonged diarrhea, Crohn's disease, and alcohol dependency may also be at risk. Strenuous exercise and conditions like hyperthyroidism increase the body's demand for thiamine, which can lead to a deficiency as well.

Benfotiamine can help restore thiamin levels and help prevent consequences of deficiency, such as nerve, heart, and brain conditions (including a serious condition known as Wernicke's encephalopathy).

In addition, some believe that benfotiamine in supplement form may aid in the treatment of:

Proponents suggest that benfotiamine can shield the body from the harmful effects of advanced glycation end products (AGEs), glycotoxins found in high-fat meats that trigger inflammation and accelerate many aging-related degenerative diseases.

To date, relatively few studies have examined the potential health benefits of taking benfotiamine supplements. Here's a look at some key study findings:

With diabetes, high blood glucose levels can lead to vascular damage through several biochemical pathways, including through the formation of AGEs. This can lead to diabetic neuropathy, a condition characterized by nerve damage.

There is some research to support the idea that benfotiamine may confer protective benefits in this regard. Three of these pathways were found in one animal study to be inhibited by benfotiamine supplementation,﻿﻿ indicating it may have a protective effect for people during the progression of this disease.

This effect was supported by another study, published in Diabetes Care in 2006,﻿﻿ in which people with type 2 diabetes consumed 1,050 milligrams (mg) of benfotiamine daily and were given a meal high in AGEs before and after the three-day period. Benfotiamine appeared to protect against the oxidative stress induced by these dietary AGEs.

A 2008 double-blind, placebo-controlled, phase III study of over 100 patients found that a medium and high dose of benfotiamine (300 and 600 mg/per day, respectively) led to a non-significant trend toward improved neuropathy symptoms, with the higher dose being more effective.﻿﻿

Despite these promising results, one 12-week study published in PLoS One in 2012 found that benfotiamine didn't significantly affect markers that lead to hyperglycemia-induced vascular complications.﻿﻿ Another 2012 study from Diabetes Care, found that 24 months of treatment with benfotiamine had no significant effects on peripheral nerve function or markers of inflammation in participants with type 1 diabetes.﻿﻿

Amyloid plaques and reduction of glucose metabolism are key features of patients with Alzheimer's disease. According to a 2010 animal study,﻿﻿ thiamine-dependent processes that are critical to the metabolism of glucose have been found to be impaired in the brains of Alzheimer's patients, but thiamine supplementation has found to not be effective. Because the body can more easily use benfotiamine than thiamine, and after eight weeks of treatment, reduced amyloid plaque numbers and improved cognitive function were found in the mouse model.

These results indicate that benfotiamine may be helpful in the treatment of Alzheimer's disease, however more research is needed for this use as well.

Although little is known about the safety of taking benfotiamine for an extended period of time, there's some concern that benfotiamine supplements may trigger certain side effects such as:

According to a 2017 review, no side effects were reported in clinical trials of thiamine derivatives for a variety of disorders using doses between 300 and 900 mg per day. One study found that nausea and indigestion were reported by several participants when they reached 7,000 and 7,500 mg/day; even though benfotiamine is converted into thiamine in the body, the effects on the body may not be entirely the same.﻿﻿

Benfotiamine is known to contain sulfur and should be avoided by anyone with a sulfur sensitivity.

Keep in mind that the safety of supplements in pregnant women, nursing mothers, children, and those with medical conditions or who are taking medications has not been established.

While not many dangerous side effects have been reported, getting up into extremely high doses is not advised as there has not been enough research to date.

Since effective doses have been observed in the 300 mg to 600 mg range for diabetic neuropathy and improved cognitive function in Alzheimer's patients, beginning with a lower dose is a good approach.

If you are considering taking the supplement, speak with your health provider to determine what, if any, amount is right for you.

What to Look For

When choosing from one of the available brands, it is a good idea to review the Supplement Facts label on the packaging of the product. This label will contain information about any added fillers, binders, or flavorings, as well as detail the amount of active ingredients per serving.

Symptoms of Beriberi (Vitamin B1 Deficiency)

Thanks for your feedback!

Verywell Health uses only high-quality sources, including peer-reviewed studies, to support the facts within our articles. Read our editorial process to learn more about how we fact-check and keep our content accurate, reliable, and trustworthy.