From what we do know, we know the one he wears on his middle finger represents pride.

Here’s a link to give you more information:
http://real-stylinson-blog.tumblr.com/post/105114243842/so-ladies-and-gentlemen-harry-styles-is-known-to

He also wears a Blue Topaz/Turquoise ring. This ring is the same color as Louis Tomlinson’s Birthstone (Louis’ Birthday is on December 24, 1991). *Interesting* 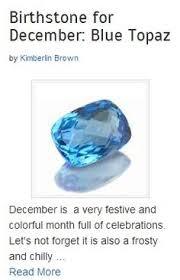 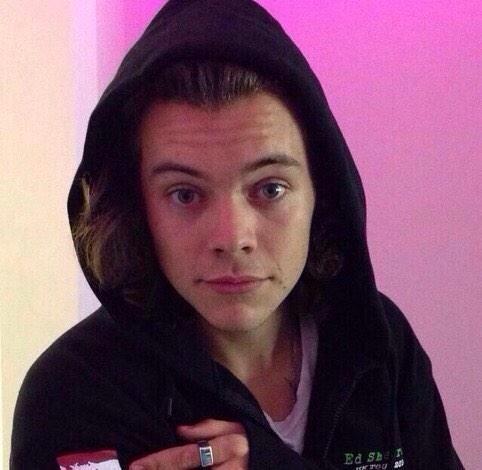 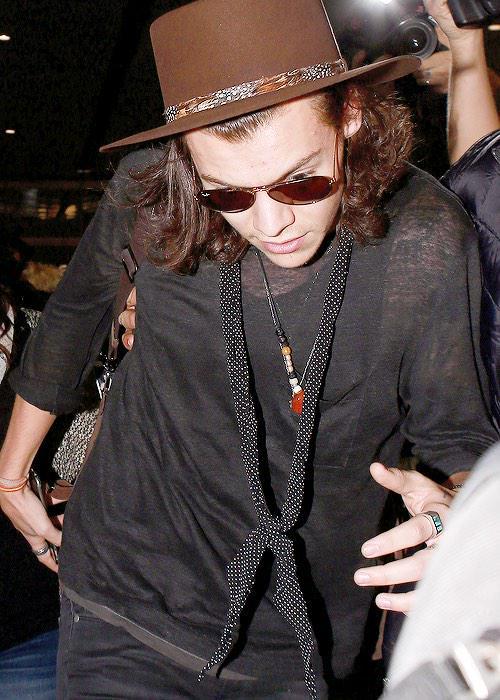 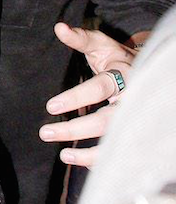 And well, honestly we are not sure of the others. But during a recent interview, when Louis says, ”sometimes people get engaged for years….”

This was Harry’s reaction….

So we aren’t for sure…But we wish we did.

Feel free to message us again :)

p.s: In (May 1st 2013/Belgium- TMH) Harry wore a💍in his left hand for the 1st time but cant say its the BEARS ring or not , neither from paps photos at same day , his left hand wasn’t shown At All in any photo !!

In (May 3rd /Amsterdam) Harry🌸 confirmed to be wearing his BEARS🐻💍

Since then he never took it off 💍

Along with his PEACE💍 ;)

- The bears on the 💍 are related to The Grateful Dead band , it was an American rockband formed in 1965 ..

A woman in the crowd said she is trying to have a child & Harry🌸 said “We All Trying” then touched his BEARS💍..😏

"Happy Birthday Louis!" cheered everyone when Louis blowed out his birthday candles. It's December 24th. Christmas Eve and Louis' 20th Birthday. They're at a restaurant celebrating Louis' birthday and Christmas Eve. Around the table where Louis' closest friends, Niall, Zayn, Liam and his girlfriend Danielle.  Also there is Anne, Gemma, Jay, and Louis' sisters, Lottie, Fizz Phoebe and Daisy. And next to Louis is his beloved boyfriend Harry.

Louis doesn't want a very large party and large guest. He wants just a small party with his closest friends. During the days after graduating high school and college. Louis and Harry moved into a very nice and decent flat. Both their parents agreed, knowing they will take care of each other both. Harry found a part time job at a bakery just across the street, and Louis is currently looking for a part time job, you really cant depend on your parents to pay the rental bill. So they went looking for job's, Anne and Jay gave them both extra money, and if they have any problems, Anne and Jay will help them. And everybody decided to celebrate Christmas Day at the Styles residence.

Louis looked around the table and not help but smile, all of his friends and family are here and Harry is here.

Harry on the other hand is a nervous wreck, he kept checking the pocket of his trousers if its still there. Surely its there. Now don't jump to conclusions. Its not an engagement ring, its a promise ring, Harry decided to give Louis this as a birthday present and to show his love and promise for him. Its a silver ring, with small diamonds surrounding it, inside of the ring was an engraving that says, "A Promise of Love". Harry decided to give this to Louis at the park, cause it its all magical there with all the Christmas lights.

"Guys, I think me and Louis will be going early." Harry said, Louis looked at him confused but Harry smiled at him. "Alright, you boys be safe ok? And don't forget. Be there at around 7 or 8 tomorrow." Anne said.

"Ofcourse, wouldn't forget it." They stood up and hugged each and everyone. "Have a fun night lads!" Niall said, hugging Louis and Harry. "Don't forget about tomorrow Haz. And Happy Birthday again Lou." Zayn said hugging Harry then Louis. Zayn then sent a quick wink at Harry and Harry gave him a thumbs up. Harry kept checking his blazer pocket, feeling if the box is still there, and thank God its still there. "Night love birds. And Happy Birthday Lou." Liam said, hugging them both. "Bye you two. Happy Birthday again Lou." Danielle said, hugging them. They said their goodbyes and Harry took Louis' hand, intertwining their fingers together and leaving the restaurant. Harry dragged Louis to his car, "Where are we going?" Louis asked chuckling. "You'll see its a suprise." the drove to the park was silent, nice silent, not awkward. Harry kept feeling the box if its still in his blazer pocket. Finally they arrived at the park, the tress has christmas lights dangling on it, and the lamps has little wreaths on it. They reached a tree where little fairy lights where dangling on it. Harry is nervous! What if he says no? He asked himself.

You bloody idiot, its a promise ring, not an engagement ring! Why would he say no?

He then realize he is right. Its not an engagement ring, he'll never say no.

But what if he'll think I'm a fool?

No he will not!

He is having battles inside his head. "This is so beautiful." Louis breathed out which causes Harry to jump out from his thoughts, "You're more beautiful." Harry mumbled, Louis blushed instantly, Harry still has that effect on him, and he thinks it'll never get old. Harry looked into Louis' eyes and decided now is the right moment.

He took Louis' hand and got down on one knee, Louis' eyes went wide, is Harry proposing to him?! As if Harry read his mind, "Relax Lou, I'm not proposing to you." Harry said. Louis let out a breath of relief, he loves Harry, he really does. But marrying him, they're still young, they have to finish University first.

Oh, the peace ring. Harry’s been wearing the peace ring since April (?) of 2013, and he appears to never take it off no matter how many times he changes up his rings. A lot of people speculate that it’s something Louis gave him (possibly as a promise ring who knows) because he has worn it for so long. It obviously holds a lot of significance to him as he’s been seen wearing it for six years— not something one does if there isn’t a deeper meaning to its presence.

Well, first of all…welcome. Second, what a time to enter into the fandom. Wow. But thank you for following me, that’s an honor.

Anyway, I have a lousy tagging system and always think I’m going to remember things but then don’t. So I can’t give you an extensive masterpost on his rings, but I will try to talk about the ones that seem most significant. @tellmethisisnotlove is much more organized, so their tags are a great place to start with general fandom questions you might have about anything (but it seems not about rings because I already tried. LMAO). With that being said…here goes:

The Peace ring he’s been wearing on that right middle finger since April 2013 and he appears to never take it off. A lot of people have the head canon that it’s the first engagement ring that Louis gave him (because of course, Louis has proposed 6 million times - each time with a new ring). The Grateful Dead bear ring he’s also worn since June 2013 (if I’m not wrong) and was a constant along with the peace ring for a long time.

I’ve read posts that say the ring finger of the right hand is traditionally the wedding finger in same sex marriages, and Urban Dictionary says otherwise. So I’m not sure and I’d have to rely on someone else’s expertise there. But the fact that Harry’s been wearing that same silver ring on the middle finger of his left hand for 4 years now seems pretty significant. He also tends to indicate or play with this ring often when either he or Louis are asked about marriage or dating.

Harry added the turquoise ring (below) in 2014 and wore it consistently for a while until, I believe, it broke. There have been head canons that it’s Louis’ birthstone (December birthstone is turquoise) and lots of talk about the fact that turquoise is a blue/green stone (and, as you know, blue & green are Larry colors).

He’s worn numerous other rings through the years - some only showing up once or twice, and others being worn often. I’m not going to add them all here because it would take me a lifetime since he has so many. Suffice it to say, the boy loves accessories.

However, in addition to the peace ring, he has been wearing these two new ones on his right hand consistently throughout HS1 promo, so I’ll detail a bit.

The rose ring popped up when Harry was papped outside a London recording studio in March 2017. It also has a caterpillar inside. And Louis probablydefinitely bought it for him. There’s also a lot of speculation about this being connected to Harry’s rose tattoo which is, of course, connected to Louis’ dagger tattoo.

The red stone ring is fairly new as well. I’ve seen talk about it being Louis’ birthstone (he’s a Capricorn and the Capricorn birthstone is garnet) and that it’s possibly also another engagement ring.

Over the years there have been various rings that seemed to have some particular significance (such as the two he “shared” while Haige was being foisted upon us), but these 6 rings seem to be the main ones he wears/has worn on a regular basis. I hope that answers your question a bit!

Sours: https://twopoppies.tumblr.com/post/160773016086/hi-im-new-to-the-fandom-and-i-love-larry-soo
I made a Larry stylinson ring